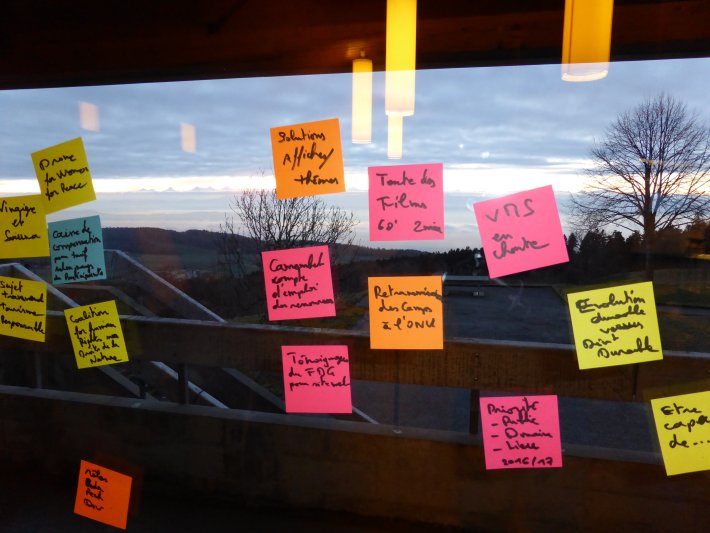 An administrative style meeting which unifies several techniques of research of ideas and development of solutions. See detailled presentation

An administrative style meeting which unifies several techniques of research of ideas and development of solutions. See detailled presentation

"Hold-Up the Ideas" is a fun and interactive brainstorming method that has been developed in recent years by various groups passionate about alternative project development techniques. In order for project leaders such as social entrepreneurs, researchers, engineers, governments, NGOs and others to solve concrete challenges, the participants of ‘Hold-Up’ discuss and exchange ideas for 30 minutes, 1 hour, or 2 hours in an innovative format which leads them to the solutions they’re searching for.

Brainstorming, brainswarming, post-it meetings, and other group activities take place here in a unifying concept which carries its own instructions and winning practices. ‘Hold-Up the Ideas’ is as a name itself a hidden technique of the organization to debate at the forefront of the reflexions on the participation and the optimization of the exchanges of ideas. Creative hold-ups have been set up to support and connect social entrepreneurs who are either physically present or at lease connected around a country or the world, depending on their projects.

They are used as a tool to enhance creativity about a project that requires help or new ideas.

After all, be aware that the method used in the ‘hold-up’ shouldn’t be unchangeable, on the contrary, it should be an adaptable method depending on the progress that the facilitators expect to have to a case. Most importantly and in order to improve, they need to adapt the method to each case separately without having to permanently question the original model. These ‘hold-ups’ that are also known as ‘creativity workshops’ have as a primary purpose the enrichment of a project chosen in advance.

The preparation phase while organizing a ‘hold-up’ is crucial.

Take the members of MakeSense company, for example, who have greatly developed the use of ‘Hold-Up the Ideas’ and are involved in this technique on an international level. The importance of the preparation phase is well explained in this Albert Einstein’s quote: ‘If I had 1 hour to solve a problem and my life depended on the solution, I would spend the first 55 minutes determining the proper question to ask, for once I know the proper question, I could solve the problem in less than 5 minutes’. This preparation phase ideally starts a few days or weeks before the event. It is then that the facilitators are meeting the person responsible for the project in order to detailly define its problems, its objectives its constraints, and its specifications. This is the challenge. But it is also an opportunity to list the questions that will be asked during the ‘hold-up’ (these can be limited to 3, 6 or 10 depending on its duration). Once the preparatory phase has been completed, it is time to get down to setting up the event itself!

A ‘hold-up’ can last 45 minutes, 1 hour, or maximum 2 hours and involves up to 15 participants. The questions that arise from the preparation phase are then asked one by one to the participants, who should give their answers on ‘post-it’ notes. This can be an argumentative situation while there are plenty of ideas but must be expressed in a short and clear way (with one word or one expression). For instance, let’s assume that there were raised 10 questions; it could be better if the exercise stays limited to 10 ideas per question raised, so that there would be a hundred of ideas at the end of this phase. In the same case, if 3 questions were raised, we would have maximum 30 ideas.

In the second phase which is the meeting phase, the facilitators select the ideas that correspond to the objectives, as well as the restrictions initially set by the project leader. They then classify them by themes.

The next step would be to form small groups of four individuals, who will deeply reflect on the themes of their preferences. Afterwards, they will be asked to frame their ideas in the form of a journal’s headings so that they endorse a formulation real and affirmative. Once that’s finished, next step would be to transfer each idea into a drawing so the initial idea feels more concrete. Lastly, the drawings would be photographed to be kept as meeting records and future working materials.

The creative workshops are part of the ‘one-for-all’ approach, which means that the main motivation of the participants must be to help their project leader. We must therefore be careful to make it clear that the participants of this ‘hold-up’ will probably bring more knowledge and ideas that withdraw from experience. It is essential not to fall in the trap of the participants who don’t know their aim of attendance are disappointed for the same reason. Another possible situation, arises from the desire to organize such a session for acknowledging the causes for challenges for all the stakeholders, so that everyone could express their ideas within the group freely. If the final tightening followed by the convergence doesn’t go far enough, the group risks of being broad in evocations for its actions taken in the creation of the project. It is therefore important to spend enough time on the convergence exercise.